A firewall of faith 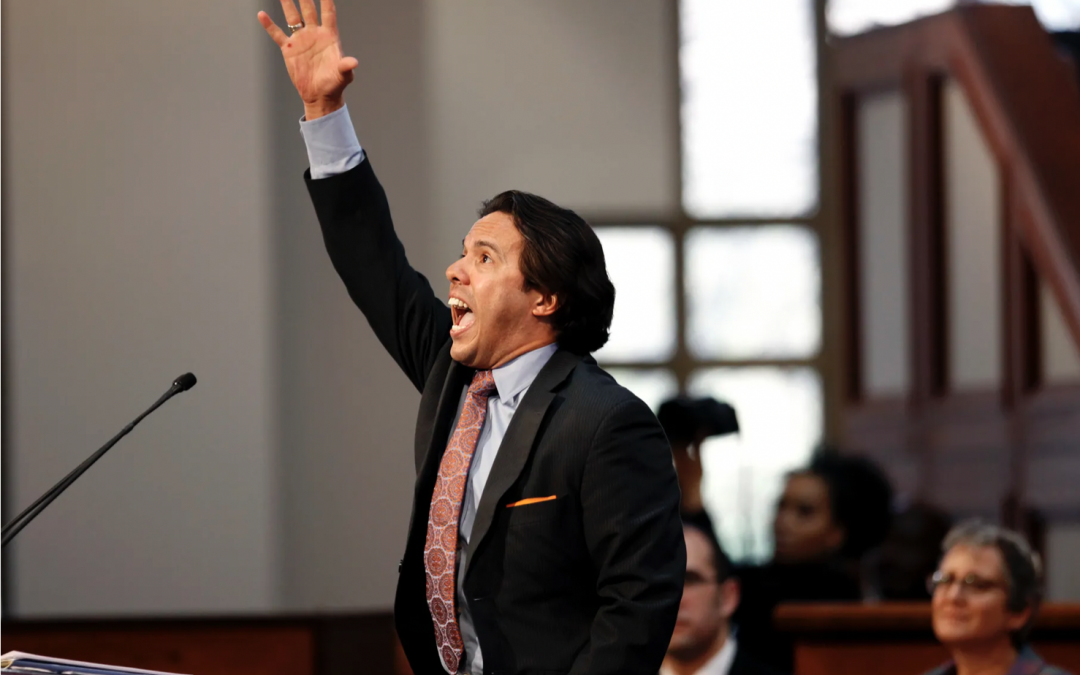 The Rev. Samuel Rodriguez is a leading voice on religious freedom and immigration reform.

The Rev. Samuel Rodriguez reportedly first preached when he was 16. Seven years later, he was ordained an Assemblies of God minister and now leads New Season Church, a megachurch with campuses in Los Angeles and Sacramento, where he lives with his wife, Eva, and their three kids.

“I’m a Christian,” he says. “I’m a husband. I’m a father. A movie producer — I call it a content provider. I prefer the term ‘cultural architect.’ A Yankees fan and Trekkie. That captures me. And definitely a green tea aficionado.”

He omits the many “influential” lists he’s made or been nominated for — including Charisma magazine’s 40 leaders who changed the world, Time’s 100 most influential people in the world and the “Israel’s Top 50 Christian Allies” list.

Our list of leaders, artists, adventurers and entrepreneurs who will change the West in 2022

He doesn’t mention praying at both Republican and Democratic Inauguration Day events (Donald Trump and Barack Obama), though he points out he’s advised them, as well as George W. Bush. He’s a registered independent, he says.

He’s known worldwide as a voice for Latino evangelical Christians. After all, he founded the National Hispanic Christian Leadership Conference, which includes 40,000-plus churches.

He doesn’t brag that a movie he co-produced, “Breakthrough,” won a Dove Award and was nominated for an Oscar or that his books, including his 2021 “Persevere With Power,” have been bestsellers.

Instead, he talks about immigration, religious freedom and the pro-life movement.

Deseret News: What priorities should our elected officials and cultural leaders pay attention to right now?

The Rev. Samuel Rodriguez: There is a deconstructive ideology permeating every single sector, not just of American society, but I would argue globally. There are no such things as intellectual, philosophical, ideological borders. Ideas go global literally overnight.

Right now, the ideology leading the world is deconstructionism, similar to what we would deem historically as the anarchist movement that paved the way for what we saw in Russia in 1917: communism, totalitarian, authoritarian regimes that led to fascism, to World War II.

We’re going down the same slippery slope with this idea of deconstructing the historical institutions that have to a great degree sustained not just Western civilization, but civilization overall.

It’s an ideology of anarchy, of chaos. There is no truth. It’s undergirded by moral relativism and cultural decadence, with no rails. It’s anti-science, anti-faith.

How do we have a commonsense, coherent, reasonable form of governance — not just politically, but where it actually trickles down to culture in society? When we don’t have that, we have a man driven by racism going into a Christmas parade and mowing down kids and senior adults. We have looting in stores in California, with very low consequence.

We’ve unfortunately been down this road before. But things are different now because we have a global pandemic. We have so much angst and tension and consternation.

DN: You are passionate about religious freedom. Can it bring people together?

SR: Religious freedom stands as the quintessential firewall against secular totalitarianism. Not just freedom of speech, but speech driven by faith.

This may very well be one of the very few opportunities where Republicans and Democrats, liberals and conservatives, Black, white, Asian, Latino, men and women can come together and say, “Yes, this is definitely something we agree on.” We have to protect our right to worship or not to worship at our discretion. We have to protect that right. There can’t be a lid on it.

What took place during COVID with some of the most restrictive measures stood as a wake-up. I live in California, fortunately, unfortunately. I suffered unprecedented incursion as it pertains to my God-given right to worship. Not only did the governor deem churches not essential, but he issued an executive decree forbidding me from having a church service with my family in my home: You are hereby not permitted to in your own home with your family chant, sing, worship.

You would expect this massive uprising. The majority of Californians — 63%, I believe, in the last study — self-identify as Christian, as following the teachings of Jesus. Yet it was a handful of pastors and leaders, primarily evangelical, a couple of Catholics that rose up. Of course, our Mormon brothers and sisters stood up and said, “No!” But it was a minority group.

We have to be vigilant. We understood quickly that a pandemic can serve as a justification whereby we lose our God-given right to worship.

They lean left on every issue but abortion. What would a post-Roe v. Wade world look like for them?

Can we heal religious rifts with tweets and Facebook posts?

DN: How do you protect against the tendency to say I want my freedom to worship, but I don’t like the way you worship or your beliefs?

SR: Some years ago, I was invited to keynote at Georgetown University for that very conversation on religious liberty. I got pushback from some people in my tribe. A key leader in the evangelical Protestant, charismatic circle, who I greatly admire, read what I said. I was very explicit: Religious liberty and religious pluralism serve as a firewall against secular totalitarians. They fought back: You’re basically giving equality for all religious beliefs. Isn’t that dangerous?

Absolutely not. We’re not a theocracy. It was the intention of our Founding Fathers that we were to be totally committed to religious pluralism, not just a Christian belief system. I’m convinced we are founded on Judeo-Christian ethos, without a doubt. Nevertheless, it is religious pluralism — us providing space in this great marketplace of ideas. … Let’s compete. Put the Apple phone next to the Samsung, next to the Android, next to the new flip phone. Let’s see what happens. Let Amazon Prime compete with Sam’s Club and Costco. Let’s see what happens. That’s what makes us great.

I pushed back on the idea that religious pluralism threatens advancement of the gospel. Quite the contrary, when we compare, people see the reality and in my view as an evangelical, fully committed to biblical orthodoxy, where people really see Jesus is the way, the truth and the life.

I have no qualms in advancing not just religious liberty, but religious pluralism. In a very secularized world, I’d rather have people talking about faith than marginalizing it to such a degree that the next generation emerges completely agnostic or atheistic.

SR: I offered a solution to President Biden that I’d offered President Trump. It’s definitely doable. It’s politically sustainable. I did my due diligence with Democrats and Republicans, including the Freedom Caucus, including the most conservative Republicans in the House.

It stops illegal immigration immediately. It does away with catch and release. It creates a system where we continue to welcome immigrants because immigrants are a beautiful blessing to our nation, without a doubt.

We want them to come here legally. Then we look at those currently here undocumented and we provide a pathway for legalization, but not citizenship. We only grant citizenship to the “Dreamers,” whose parents brought them here as children and they had no choice. They shouldn’t have to pay for the sins of their parents. We should grant those individuals who are not engaged in nefarious activities and do not have a criminal record immediate citizenship. Immediate. That’s a group of approximately 1.82 million. The parents become permanent residents, but they will never be- come citizens because there’s a price to pay for coming here illegally.

They’ll never be deported, as long as they’re not living off the government. They’re not going to get government entitlements. … That’s a solution I offered to the last couple presidents and leaders on both sides of the aisle.

DN: Does a “marketplace of ideas” still exist?

SR: In reality, we live in an echo chamber of mutual approbation. We have our own silos. We’re not listening anymore, way before COVID. But during COVID — and I have great empathy for those who lost loved ones — not only did people pass away and die, we saw that a number of other things died: logic, common sense, reason.

We’re not having conversations. We’re having confrontations. We have a myopic worldview and to a degree it’s myopia with narcissism. It’s self-absorbed selfie taking, looking at the mirror, rather than looking out through a window. … “If you’re not 100 percent in alignment with my orthodoxy, I can’t create room for you.”

That’s unfortunate. I love having intellectually enriching debates. I do believe as people of faith we should be driving these conversations.

DN: Can religion become too political?

SR: It is possible for religion to be corrupted by politics. It is likewise possible for politics to be overrun by a religious belief that may place a lid on the liberty of others. Hence, we have to ride this wonderful equilibrium.

Does faith have a place in the political landscape? Absolutely.

Faith has an incredible role to play, especially in bringing groups together, in providing a reconciliatory prescription. Every single great shift in America’s political, cultural landscape derived from the impetus of faith. It was the “black-robe regiment” preaching from their pulpits that prompted the American Revolution. The abolitionist movement? Faith driven. It was faith groups talking about equality because of the verse from Paul in Galatians regarding men and women that led to voting rights for women. Martin Luther King Jr. understood that and did it again in the Civil Rights Movement.

Every great shift where America got closer to the light of truth and love and righteousness and justice took place because the church and people of faith stood as the catalysts.

In the past two years, we’ve seen movements emerge that lack the impetus of faith. When movements lack faith, those movements die without measurable, long-term impact.

DN: What do you think the next great movement of faith will be?

I’m not preaching now, but there is this verse in Revelation 2:20, which undergirds this movement that’s already emerging. … The thing the spirit of the Lord had against his church was the fact they tolerated Jezebel. We’re about to see the movement that understands we are what we tolerate. There are things we tolerate because we’re afraid of criticism, of being unfollowed, of losing likes. When my hunger for righteousness is greater than my fear of criticism, nothing can stop me. That’s driving this movement of faith.

We’re about to see a womb-to-tomb pro- life movement. This is not the “My objective is to overturn Roe v. Wade” period. This is way beyond that, elevating the image of God and every single human being from the moment of conception to the moment you depart from this planet. It continues to advocate for the sanctity of life, but it also cares about what happens when the baby is born. It’s a movement that wants to empty out foster homes by having people of faith adopt, and every community of faith stands solidly behind the idea that if there is a pregnancy that was unexpected, we provide support for that beautiful young woman, and say, “Hey, if you don’t want the child, we’ll take care of the child. But you’re beautiful, and you’re created in the image of God. And God has great purpose for your life.”

It is a pro-woman, pro-child, pro-life movement that is beautiful and transformational.

SR: The American experiment is not over as long as we have people of faith. Period.