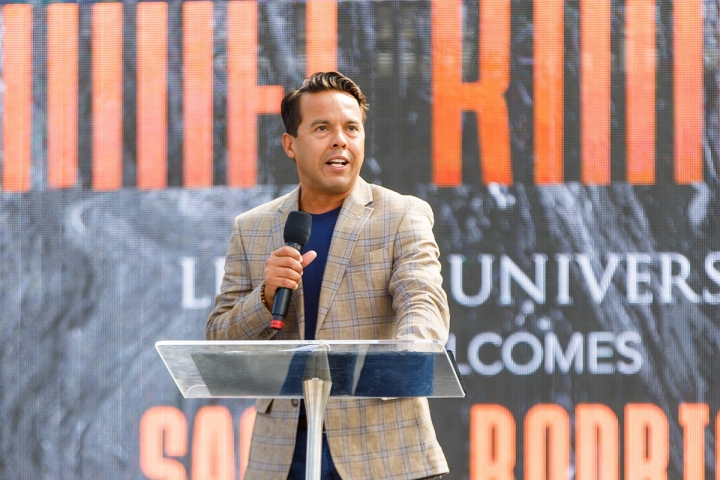 During Liberty University’s Wednesday Convocation, held in Williams Stadium, author and pastor of New Season Church Samuel Rodriguez brought a message of motivation and encouragement to the student body, imploring them to be a light in our dark world.

The morning began with a time of worship before Liberty Campus Pastor Jonathan Falwell introduced and welcomed Rodriguez.

“I believe God is going to use (Rodriguez) today to speak to us, to challenge us to stand up, to rise up to the occasion, and to be who God called us to be,” Falwell said.

Rodriguez, who also serves as president of the National Hispanic Christian Leadership Conference (NHCLC) — the world’s largest Hispanic Christian organization — said that the world we live in today is dark but as Genesis Chapter 1 indicates, God shines light even when darkness may be present.

Rodriguez reminded listeners of Christ’s power to overcome any odds.

“In the midst of darkness comes a truth, an everlasting truth uttered by our Savior,” he said.

Rodriguez referenced Jesus’ words in Matthew, where He said that believers are the light of the world who are to shine their light for the world to see.

He encouraged students by telling them that our past or current circumstances, while they may be discouraging, do not define a child of God.

“Here’s the great news from what took place on the cross: Christ defines you,” he said. “You are not defined by what surrounds you.”

In a culture driven by social media, Rodriguez said that popularity is not a genuine indicator of how much we are cherished by our Heavenly Father.

Rodriguez told students that to be able to witness to the world about the saving redemption found in Jesus Christ, they must remember that perfection is not a requirement.

“God doesn’t call the perfect; He calls the willing,” he said. “He doesn’t call the one who has it all, He calls upon the one willing to surrender it all. Because every single time light stands next to darkness, light always wins.”

By practicing diligence in removing the things from our lives that hinder us from growing closer to Christ, Rodriguez said boldness will grow.

“Today’s complacency is tomorrow’s captivity,” he said. “There is no such thing as comfortable Christianity. You are what you tolerate.”

As the world looks to turn off the light of Christianity, Rodriguez implored Liberty to continue to fight the good fight of faith.

“While many are waiting for Jesus to come down, Jesus is waiting for His church to stand up. It is that hour. There’s a battle out there. It’s a spiritual battle.”

Although COVID restrictions in Rodriguez’s current state of California have hindered church gatherings, he said that nothing in the world will be able to prevent the Spirit of Jesus Christ from spreading even as persecution arises.

As an example of boldness, Rodriguez concluded by sharing how the Lord gave him the words to say when he was invited to share what was on his heart during President Donald Trump’s inauguration, with former presidents in attendance. Despite being cautioned about saying Jesus’ name with the world watching, Rodriguez did so as an act of faithfulness to the Lord and was overcome by what followed.

“The moment I mentioned Jesus, the presidents said amen. Members of Congress said amen. Behind me you could hear people and you could see them saying amen. The audience shouted amen,” he said.

Rodriguez said that he believes the reason why people all over the world were shaken by the mention of Jesus is because of the power that has always been and forever will be in the name of the Savior of the world.

“There is still power in that name.”